This was a rescheduled match on what turned out to be a flooded river Trent, having been moved from the Viaducts the previous week.

Nine of the mightiest RoTAS Warriors turned up to do battle on the rising river! Info from the Fed was that you needed some cover and to be on the inside of the bend, pegs 6-12.  This seemed to be reflected in the results.

Options were limited, either a feeder/bomb down the edge or a light pole rig in the flooded back water slacks.

Dave Cooper showed his scratching skills by winning the match with a selection of small fish taken on the feeder at peg 12.

Shaun was on peg 8 and caught on the pole and maggot in a slack behind a fallen tree.

Other anglers stuck it out all day, hoping for a barbel/chub/bream or eel. However, sadly it seemed that they were all hiding and none of them turned up!

A total of 18 RoTAS warriors turned up to do battle at Willow lakes, with the match spread over both Ash and Hawthorn Lakes.

The results reflected the fact that Hawthorn Lake was always the preferred pool to draw on, with the top three weights coming from it.

Mark drew peg 11 on Hawthorn (permanent peg 17) and was more than happy with his draw, having had this peg twice previously in open matches at Willow Lakes.  Mark fished banded 4mm pellet across to take a few early carp, before focusing down his left and right margins where he caught the resident big ghosties on a bunch of maggots.

Greg ‘KO Cup Champion’ Wain put in yet another great performance from peg 2 (permanent peg 1) on Hawthorn and caught carp straight from the off.

Rich Nickels was drawn on the best peg on the complex but struggled to start, before catching steadily in his margins for the last two hours.

Charlotte Baker put in a feeder fishing master class on Ash 12 to comfortably win her lake with 76lb 12oz, and taking 4th place overall on the day.

Also, a special mention for junior angler Keanan Staley who weighed in 48lb 4oz and smashed his granddad off the next peg!

With the sun shining brightly, little breeze and crystal clear water, we all knew that this was going to be a tough match.  That said, it was a great turnout for our first River Trent match this season, with 17 RoTAS Warriors attending.

Phil Aldridge had a comfortable win from peg 10, catching roach and dace by switching between waggler and pole.

Steve Rutter was on peg 1 and fished a small maggot feeder. His catch of 7lb 12oz included a decent bream of about 2lb.

Third place went to Junior member Ollie Strutt, who put in a master class on the whip at peg 5. His net included some lovely plump roach. 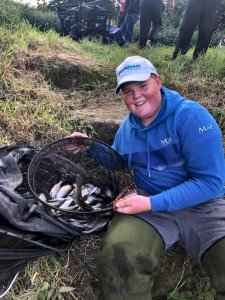 Although the weights were generally low, everyone did actually weigh in and the Trent was full of tiny chub and dace. The signs are encouraging and hopefully the fishing will be great in a couple of years.

A total of 18 RoTAS warriors turned out to fish the popular Hackett’s Big Lake fishery.  The weather was rather chilly in contrast to the previous week, probably accounting for the fishing being tougher than we had hoped. On the day, the usual fliers (pegs 10-15) did not really perform.

Josh completed the frame, putting in a steady performance from peg 10 to take third place.

Charlotte Baker had a personal best carp with a fine fish of 14lb 10oz from peg 16, accounting for more than half of her 9th placed final weight of 25lb 10oz.

Sunday was the Knock-out Cup final, with Phil Johnson taking on Greg Wain.  As Phil was the first to get to the final it was him to draw first, resulting in Greg fishing the next peg to Phil’s right hand side.  Greg took an early lead and had Phil on the ropes for most of the match, until Phil landed one the resident big carp on his margin pole.  With Greg now knowing his lead was under pressure he just had to hope that Phil wouldn’t get anymore! Thankfully for Greg, Ricky soon called time on the match, giving Greg a narrow victory over Phil to take the KO Cup Trophy.

An excellent turn-out of 20 anglers fished this match, with Steve Rutter taking the honours in what turned out to be a fairly close battle for the top positions. He caught big carp on short pole from peg 7 to claim his first match win of the season.

Mark took runners up place by catching carp on sweetcorn fished on the long pole, on top of the sunken island at peg 21.

Third place went to Martyn Staley who caught some great lumps down the edge on paste at peg 9.

A total of 17 anglers fished this match, returning excellent weights that all exceeded 34lb. It produced the first win of the season for Rick Smith, who dominated the match from peg 20 – catching on bomb and pellet for most of the match, followed by paste in the margins for the last hour.

Colin drew peg 28 and made the most of the spare pegs either side of him. He fished a method feeder to the far bank to amass 155lb 4oz for 2nd place.

Greg Wain struggled for the first half of the match before switching to paste and slaying some margin mud pigs for 153lb 11oz from peg 7.

In the Knock-out Competition, Greg Wain defeated Richard Nickels and he will now face Phil Johnson in the final.

This was a new venue for the RoTAS Warriors.  In complete contrast to the previous match, the weather was dry and warm with a moderate breeze – which made a welcome change for the 16 anglers who fished the match!

Mark drew peg 5, which gave the option of a cast to the end of one of the two islands.  Mark fished a small hybrid feeder here most of the match to accrue 174lb 15oz and a comfortable win.

Similar to Mark, Colin on peg 8 also had a cast to the end of the other island.  Fishing a feeder to this spot saw him amass 132lb 12oz of carp for second spot, narrowly edging out Greg Wain who put in another great master class on pellet waggler fishing.

In the Knock Out Competition there was a win for Greg Wain, who will now face Richard Nickels in the semi-final at Decoy Lakes.

There were some notable individual fish caught, including a grass carp of 4lb 1oz by Mark Baker, and Richard Nickels had a ghost carp of 13lb 14oz. 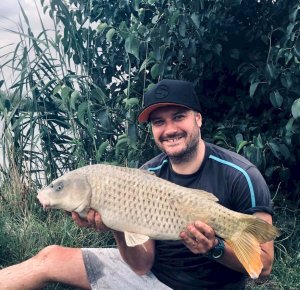 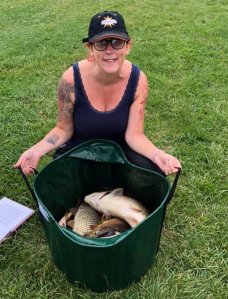 The 15 anglers who fished this match experienced some pretty grim weather; the rain literally did not stop all day – in fact, it got harder!

Greg Wain won the match catching from unfancied B7 on pellet waggler.  All credit to Greg as his tactic surprised many, since there were no signs that the carp were up in the water.

Colin drew A4 and caught large carp from the off, casting tight to a cove in the island.

This match probably turned out to be the best we have known the venue fish.  Conditions were kind and, although overcast weather was forecast, the sun actually stayed out for most of the day. A total of 18 anglers weighed in, with 14 of them putting more than 50lb onto the scales.

Mark secured his first win of the season, weighing 189lb 10oz from peg 2.  Tactics used were hybrid feeder to the corner of the island and maggots in the margin on pole.

Greg also had a great day, securing 2nd place by catching carp all day on top kit plus one down the edge on corn and paste from peg 7.

Phil Johnson, aka ‘Moaning Myrtle’, started off slow but soon bagged up at peg 26 fishing the feeder to the island and pole down the edge.

A total of 18 RoTAS warriors turned out to fish the first of two matches at Makins, with the club having a return visit at the end of July. On this occasion we were pegged over two lakes, Repile and Snake on Phase 2.

Although conditions looked spot on, the fishing was a little slower than we had hoped.  This was a real shame as the venue looks great, a very mature fishery with good depth and a variety of different fish species.

Colin Elliot (Captain of Team Scotland) took his first win of the season.  Colin fished a feeder into the gap at peg 4 on Snake Pool, catching carp throughout most of the match.  Colin’s weight was also enough to beat Nic Wort in the KO Cup!

Runner up on the day was Mark.  He drew favoured peg 12 in the corner of Snake Pool, returning a weight of 35lb 13oz that consisted of a mix of 50/50 carp and skimmers.

Although the venue fished hard, the match itself was one of the closest as regards weights, with little more than 10lb separating the top 7 places.

Our members and matches