A total of 18 RoTAS warriors turned up to do battle at Willow lakes, with the match spread over both Ash and Hawthorn Lakes.

The results reflected the fact that Hawthorn Lake was always the preferred pool to draw on, with the top three weights coming from it.

Mark drew peg 11 on Hawthorn (permanent peg 17) and was more than happy with his draw, having had this peg twice previously in open matches at Willow Lakes.  Mark fished banded 4mm pellet across to take a few early carp, before focusing down his left and right margins where he caught the resident big ghosties on a bunch of maggots.

Greg ‘KO Cup Champion’ Wain put in yet another great performance from peg 2 (permanent peg 1) on Hawthorn and caught carp straight from the off.

Rich Nickels was drawn on the best peg on the complex but struggled to start, before catching steadily in his margins for the last two hours.

Charlotte Baker put in a feeder fishing master class on Ash 12 to comfortably win her lake with 76lb 12oz, and taking 4th place overall on the day. 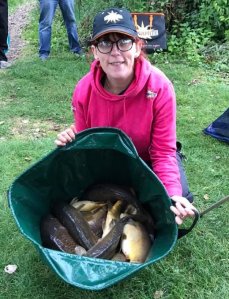 Also, a special mention for junior angler Keanan Staley who weighed in 48lb 4oz and smashed his granddad off the next peg!

This site uses Akismet to reduce spam. Learn how your comment data is processed.

Our members and matches